We used to talk like that when we were ambushed. We used to know the difference between a legitimate disagreement, or even a conflict, and a deliberate, unannounced act of war. We used to have the will to see through to the end what had to be done to ensure the threat that revealed itself in that act of war never threatened us again. We used to think we'd always be able to do that. Sadly, it would appear that we are not.

Hawaii is 4 hours behind us here in Tennessee. At 7:55AM, December 7, 1941 the Japanese conducted a surprise attack on the US Naval base at Pearl Harbor. It was 11:55AM here in Tennessee. Over the next 2 hours that attack would claim the lives of 2,403 Americans and wounded another 1,178.

Time Magazine has an excellent timeline of the events. Here are a few excerpts.

07:55 -- The raid begins at Pearl Harbor as the Raleigh, Helena, Utah and Oklahoma are struck.

07:56 -- There are two explosions on the Arizona. Pfc. James Cory: “The bridge shielded us from flames ... Around the edges in these open windows came the heat and the sensation of the blast. We cringed there ... I think that at this moment I wanted to flee, but this was impossible. You're on station, you're in combat.” 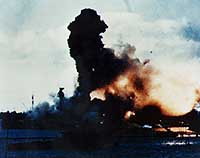 08:06 -- A 1,763-lb. missile fired by PO Kanai Noboru hits the Arizona. It demolishes the forward magazine and kills nearly 1,000 men. “It was so vivid in my mind,” says Private Le Fan, who saw the action from the Marine barracks. “[The Arizona] just quivered, buckled and then settled. It looked like ... well, that killed it ... It was so devastating.” 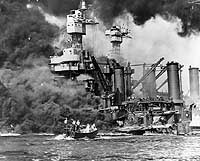 8:08 -- Two bombs strike the West Virginia, whose captain, Mervyn Bennion, is mortally wounded by a piece of shrapnel that flies over from the Tennessee.

08:10 (13:40 E.S.T.) -- In Washington, President Roosevelt is informed by Navy Secretary Frank Knox that there has been a sneak attack on Pearl Harbor. This is “just the kind of unexpected thing the Japanese would do,” says FDR. “[A]t the very time they were discussing peace in the Pacific, they were plotting to overthrow it.” 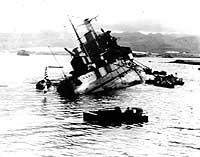 08:50 (14:20 E.S.T.) -- In Washington, Secretary of State Cordell Hull, well aware of what is transpiring in Hawaii, erupts when given a note from the Japanese breaking off peace talks: “I have never seen a document that was more crowded with infamous falsehoods and distortions on a scale so huge that I never imagined until today that any government on this planet was capable of uttering them.”

08:54 -- The second wave of the Japanese attack, this one under the command of Lt. Comdr. Shimazaki Shigekazu, swarms over Pearl.

09:06 -- A bomb hits the Downes while she sits in dry dock. Another strikes Adm. Husband E. Kimmel's flagship, the Pennsylvania, detonating guns and ammunition.

09:10 -- In order not to block the channel that leads out of the harbor, Lt. Comdr. J.F. Thomas beaches the wounded Nevada at Hospital Point.

09:15 -- Captain J.W. Bunkley, who has spent the night ashore, returns to the California. The ship has been hit numerous times and is in flames. ... Within an hour, Bunkley is forced to abandon his ship.

09:20 A bomb passes through the dock alongside the cruiser Honolulu. It explodes underwater, flooding part of the ship and damaging her oil tanks.

09:37 -- A large explosion on the battleship Cassin causes her to roll over onto the Downes.

By the time the attack was over, of the 90 or so ships berthed at Pearl Harbor 66 years ago, over

If we take the German annexation of Austria in March of 1938 as the start of WWII, that conflict lasted a little over 7 years and claimed about 70 million lives in all around the world. That figure amounts to almost 4% of the total population of the world at that time. I doubt accurate figures on the number of wounded can even be approximated. We found the will and the determination to see that conflict through to the end despite these horrific figures. That determination, in part, earned the people who possessed it the name, ‘The Greatest Generation'. That we cannot seem to find the same courage of conviction dishonors the sacrifice of those who entrusted their nation to us for safekeeping by paying the ultimate price to defend her.